Luthier Jonas Bromander live with his family in a small village called Lejsta, located outside Uppsala. There he has his workshop in an old barn building. He shares his time between consulting organizational development and guitar building.
– That's why I build a few instruments a year, but every guitar gets extra care and love, he explains. In my instrument making, I focus entirely on building steel-stringed acoustic guitars. In addition, I also provide courses for anyone who wants to build their own guitar. With my supervision, you get a good sounding instrument with you home after the end of the course.

What is it that has shaped you into the guitar builder you are today?
– Wood crafts and music have been obvious companions in my life since childhood. I have my background in the traditional handicraft, where I not least had the reason to learn about wood and how with simple hand tools you can achieve both efficiency and high precision. Musically, I have both played and listened to guitar music a lot over the years, in a variety of genres. I built my first guitar with the help of the luthier Andras Novak who has his workshop in Stockholm. Then I went to Richard Osborne in England and further developed my knowledge.
What are your benchmarks when building your instruments?
– Actually, I have no role models among other builders or guitar brands. However, I want to be completely uncompromising in terms of playability, tone quality and aesthetics. At the same time, these components should also suit the individual guitarist. The guitar should respond to the guitarist's touch sensitivity. I want to get it dynamic and even in tonality across the whole fingerboard. At the same time, the sound should be rich in harmonics that give both the bottom of the bass and the glitter in the treble.
What models are you building?
– I have four different models today. They range from Parlor to Dreadnought in size. The basic price is SEK 30,000. If you want something extra, inlays or a cutaway, there will be a few thousand more.
Which tone woods do you prefer?
– The material choices are relatively traditional. But for the top, I vary between sitka spruce, alp spruce and cedar. The sides and bottom are mainly in East Indian Rosewood. But right now I am working on a Maple guitar that has an Alp Spruce top. It is also very fun to deviate from the traditional types of wood and find other solutions. I just sawed up a bit of Black Oak for fingerboards. The oak was analyzed with carbon-14 by the Swedish Museum of Natural History and it turned out to be 5200 years old! There will be a maximum of 10 guitars of that piece and alongside everything else that is unique with a hand built instrument this will be something really extra. I mean, you get a guitar with materials from the time the pyramids were built.
You are now also building guitars with the True Temperament Fretting System. How was the result?
– I knew from the start that the intonation would be good, but you never know if that advantage would give tonal or dynamic disadvantages. But I haven't experienced anything like that. I simply became very happy about the instrument. That was what I was aiming for. It responed in the same way as my other instruments. 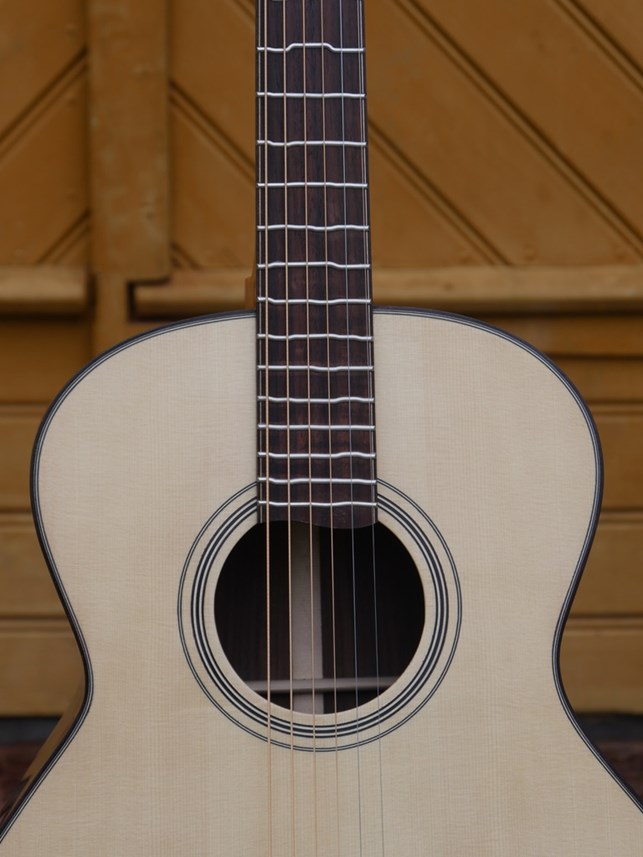 How has the response been among your customers and at the guitar fairs you have shown the TT guitar?
– I have shown the TT-guitar at the Copenhagen Guitar Show, Uppsala International Guitar Festival and the Scandinavian Guitarshow in Stockholm and the reception has been overwhelming. Adding a perfect intonation to a good-sounding and easy-to-play instrument has more than once given rise to the term "magical". Similarly. I have also had the opportunity to test the guitar on guitarists with a skeptical basic attitude to TT. They are often very pleasantly surprised. 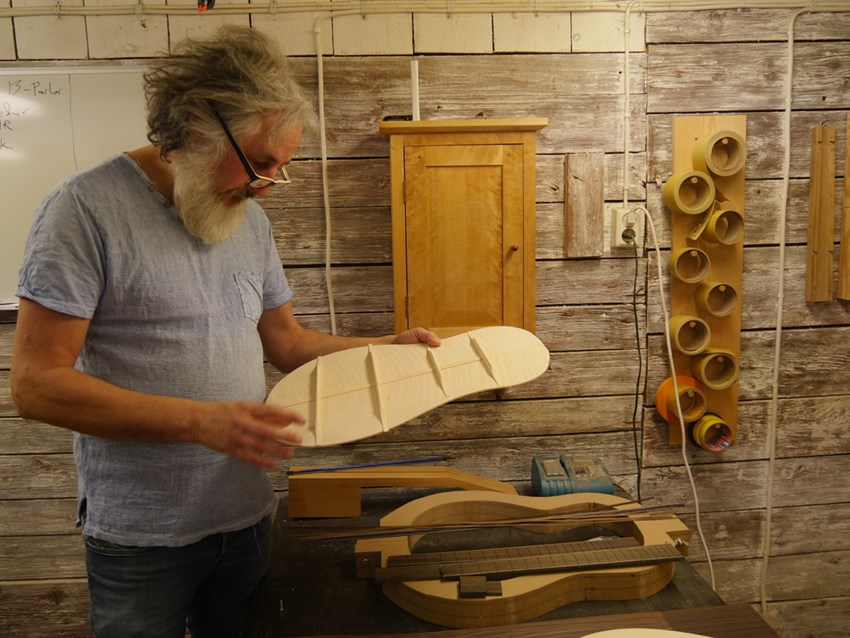 There´s been a boom in recent years in terms of boutique-made, locally produced guitars, amplifiers, power pedals etc. Have you noticed this change yourself?
– There is obviously a great interest in hand built guitars, just as there is interest in locally produced food, beer and other crafts. When everything around us is mass-produced, streamlined and standardized, the hand-built instrument adds an extra dimension to the music. It is in some sense invaluable. Ulf Zackrisson
More information: www.bromanderguitars.com

11 October 2021
New exclusive custom 6-string electric guitar from GNG with spectacular craftsmanship – and TT frets! The fantastic Giulio Negrini design of the GNG Elvish Brea is inspired by The Lord of the rings movie.

30 September 2021
Designs, quality and playability of Mayones guitars and basses are the result of the perfect blend of almost 40 years of tradition, modern technology and craftsmanship. In addition to highly equipped standard models Mayones also offer custom options, for instance the True Temperament Fretting System. One of the latest guitars from the Mayones factory is an exquisite Legend model with TT frets.

23 September 2021
GNG – Giulio Negrini Guitars makes instruments like no other. Instruments that combine top craftsmanship and high end guitar build. The Morgoth XV Anniversary – built for the 15th anniversary of GNG (2006-2021) – is a one of a kind 6-string multiscale guitar equipped with True Temperament fanned frets.
Show more