A most important person in the development of the True Temperament Fretting System is co-founder and senior adviser Paul Guy.
Paul came to Sweden with a band in 1975. He had a history as a professional musician and guitar technician in his native England. He played with several Swedish groups and worked as a live mix engineer for a while. In 1980 he  opened his own guitar workshop in Stockholm, where he built his own guitars and carried out repairs.
To further develop his innovative fretting system, in 2006 the late Anders Thidell (1966-2022) teamed up with Paul Guy – then an internationally acknowledged authority in the field of guitar tuning.
In this article, Paul recalls the beginnings of True Temperament and how Anders and he developed what today is considered by many guitar experts and world renowned guitarists, to be the greatest improvement to the guitar in several hundred years.

When Anders came to your workshop he´d been around guitar techs in Stockholm to show his invention. None seem to understand his invention, but you did.
– I had been researching the theory of musical scales for some time, and had written an article called ”A Short History of Tuning and Temperament” for my website. I had also had a little pamphlet – ”Tuning The Guitar” published. Anders and I had been running into each other at guitar shows for a couple of years, so we were aware of each others’ work. We gravitated together out of mutual interest.
–  99.5% of musicians and instrument makers (in the Western world, at least) have accepted Equal Temper as the optimal compromise when it comes to the problem of dividing the octave into 12 intervals. I was not convinced. Neither was Anders, he had his sights – or should I say, his ears – set on Just Intonation (pure intervals). 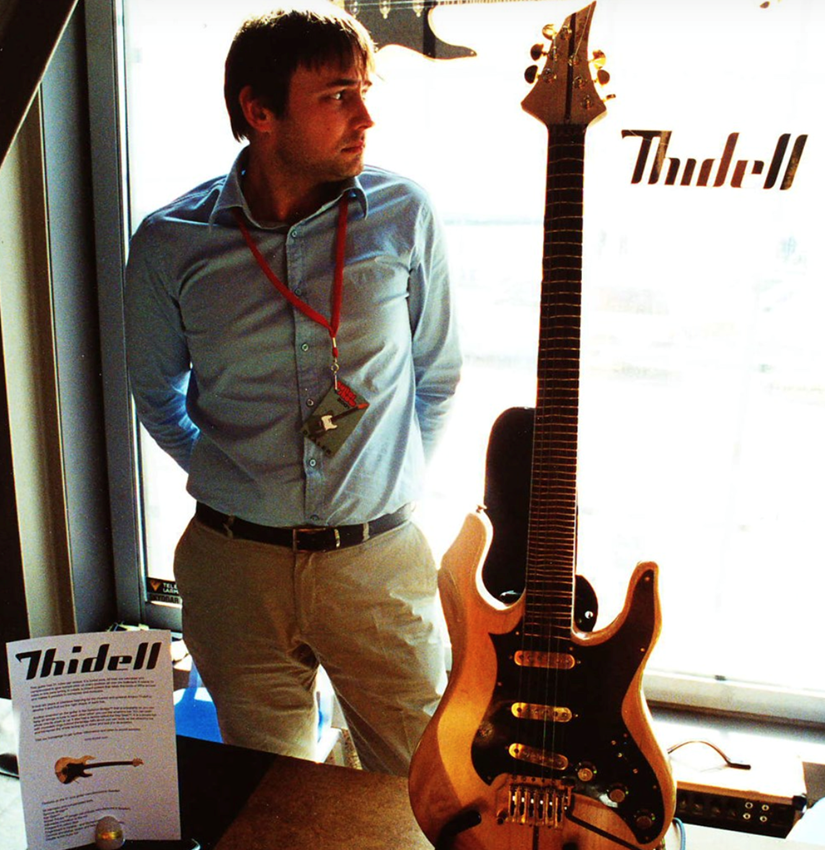 His prototyp guitar had 31 curved frets per octave and was, to be honest, not very market friendly?
– It was designed for Just Intonation and had 52 frets on a 30 inch scale. It was a work of genius, but he was just about the only guitarist who could use it. An amazing achievement, but as a commercial proposition, it was dead in the water. Also, prohibitively expensive, because of the amount of work involved.
– He was pretty secretive about his methods and techniques at first, but when the people who had been backing him went bankrupt, he came to me and asked if I would be interested in collaborating. I was somewhat sceptical, but when he explained his ”Dynamic Intonatio” process, and how the ”Curved Frets” were manufactured, I had an ”Aha!” momemt. I saw the potential straight away.
You then came up with the excellent and intelligent idea of applying Anders' invention to standard 22 fret necks with 12 frets per octave. Can you explain how the actual process was done going from 31 frets to 12?
– It was just a simpler implementation of Anders' Dynamic Intonation process. Instead of empirically determining the exact locations of 312 string to fret contact points, he ”only” needed to find 132 (144 for 24 frets).
– I had been looking into Well Temperaments (there are many variations), and had become convinced that there was a better solution than Equal Temper. On the web, I found Dr. Bradley Lehman, an authority on J.S. Bach and the harpsichord. He claimed to have discovered the temperament which Bach himself used for the ”Well Tempered Clavier”. His demo videos with harpsichord and organ sounded so harmonically pleasing that I was completely won over. I had always felt that the harpsichord sounded like an overgrown banjo, but with his tuning it sounded more like a large, expensive, acoustic guitar.
What was Anders' reaction to this?
– I said, ”If you can do that with 31 frets to the octave, you can do it with 12!” I then told him about the ”Bach/Lehman” temperament, and suggested implementing it on the guitar. His jaw dropped! It was like a flashbulb going off in his brain. He had been so fixated on Just intonation that it had never occurred to him to apply his Curved Frets and Dynamic Intonation to a fingerboard with 12 frets to the octave, that any guitar player could use without having to start from scratch, learn a whole lot of esoteric harmonic theory, or adapt their technique. 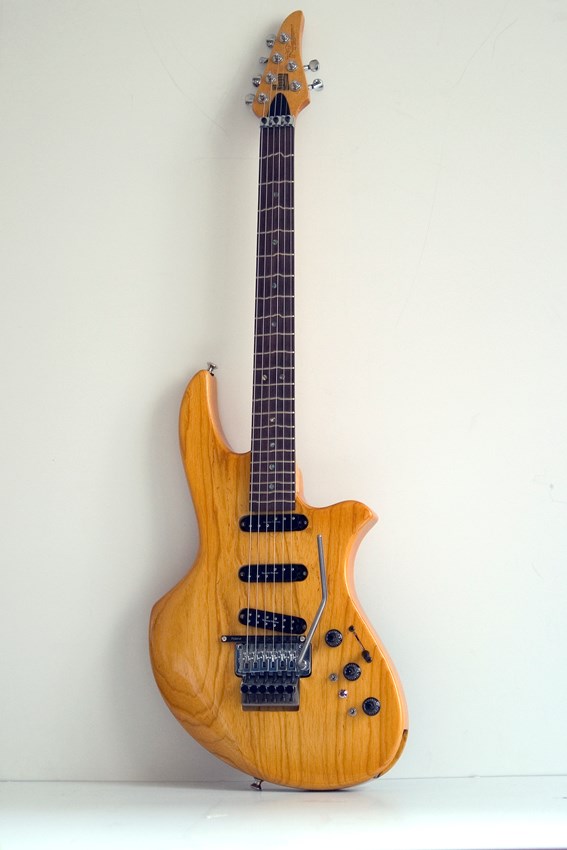 – As a ”proof of concept”, Anders first designed an Equal Temper fingerboard, to correct for the discrepancies in intonation that are inherent with straight frets. This did exactly what it was intended to do, but obviously did nothing to reduce the beating of equal tempered intervals (major thirds in particular).
– Next, he designed a fingerboard with the Bach/Lehman intervals, which I dubbed ”Die Wohltemperirte Gitarre” for obvious reasons. This sounded particularly nice in minor keys, but Anders felt that it needed modifying to compensate for the quirks of the guitar's fourth – fourth – fourth – third – fourth accordatura.
– With Bach/Lehman as a baseline, he developed his own temperament to better suit the guitar. To me, this was as much an achievement as his Just Intonation guitar. To my knowledge, no-one had ever formulated a temperament specifically for the guitar before. Hence ”Thidell Formula 1”!
Anders even designed a board with Meantone intonation, but this was an altogether too weird-looking and overcomplicated monstrosity that only a couple were ever produced. As with his Just Intonation guitar, he was the only guitar player who understood how to use it!
What else was your contribution in the beginning?
– Apart from the ”technical” knowledge to understand where he was coming from, and to be able to make constructive suggestions, I had the workshop, tools, materials and not least, a Precision Strobe Tuner! I also came up with the ”True Temperament” and ”Thidell Formula 1” names.
– I also put a lot of effort into writing about the theory behind True Temperament and the benefits it brings to the guitar – and the player! I wrote almost all of the information for the website. It was all written in English initially, which I then translated into Swedish for our Swedish site.
– I inherited some money when I sold my mother’s house after she passed away in 2007. I invested in a CNC machine, which enabled us to rout the fret slots in-house instead of outsourcing the job. This speeded up production no end. It is still in service.
– Our patent was written in Swedish by a patents expert, with considerabe input from me. It had to be translated into English for the international patent applications. This would have been very expensive if I hadn’t undertaken the job! Luckily I was conversant with patent jargon, having read quite a few about fuzzboxes, vibrato arms and suchlike, so it was quite fun to do.
If you should describe TT, what it means and how it affects you as a guitar player?
– It puts an end to the nagging sensation of never being completely in tune, and makes chords sound more harmonious. (You can play major thirds with heavy distortion without unpleasant beating at last!)
In your opinion what has TT meant for the development of the guitar?
– It's the biggest advancement in guitar tuning and intonation in the last 400 years.
So the future looks bright for TT?
–  It has been a long hard grind to gain general acceptance, but that is par for the course when it comes to any revolutionary invention. True Temperament will never entirely replace standard straight frets, but more and more discerning guitar players with sensitive ears are going to want to adopt it.
© Ulf Zackrisson

12 December 2022
The Swedish high end bass guitar brand Mattissonbass, has delivered hand-built instruments in the upper price range all over the world for the past decade. After working with many famous bassists, the demand has increased enormously. In order to meet demand, Mattissonbass has decided that they need help with production.