TT got hold of the amazing Scar Symmetry-, Meshuggah-, Nocturnal Rites-guitarist Per Nilsson for a chat about his new Strandberg Singularity 7- and 8-string True Temperament models. Without a doubt the hottest and coolest electric guitars on the market right now. The Singularity True Temperament looks, plays, feels and sounds like no other guitar in the world.

How does it feel to be able to launch two such spectacular signature guitars?
– It feels absolutely incredible. Ola Strandberg and I started collaborating on my signature guitar model back in 2013 and we have been prototyping and roadtesting new versions of the guitar – including the first production model of the guitar that we released in 2014 – ever since, and these two brand new models are the culmination of this lengthy process.
– It's very exciting to work with such a forward-thinking company as Strandberg as they have so much prowess for innovation and passion for the art, and as successful they are as a business entity they seem to be much more interested in creating inspiring instruments, supporting the players and building community than maximizing profits. 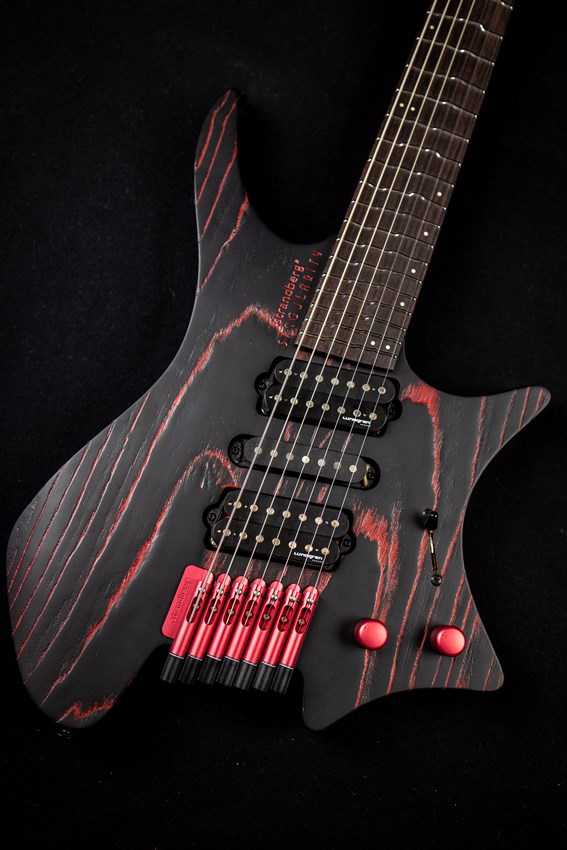 Strandberg Guitars is, as you mentioned, really cutting edge when it comes to modern guitar manufacturing, which also applies to the True Temperament Fretting System. Is this the ultimate electric guitar concept so far?
– It is, for me at least. Both Strandberg Guitars and the True Temperament Fretting System challenges and redefines the idea of what an electric guitar is. True Temperament makes the inherent intonation inconsistencies of conventionally fretted guitars a thing of the past, and Strandberg makes you wonder why the heck you were wearing a five kilogram guitar with a baseball bat shaped neck all those years when their much lighter and more playable instruments save your back and your hands without compromising any of the tone – in fact, in my experience the resonance, sustain and tone on Strandbergs are largely superior to those of most ”traditional” guitars. 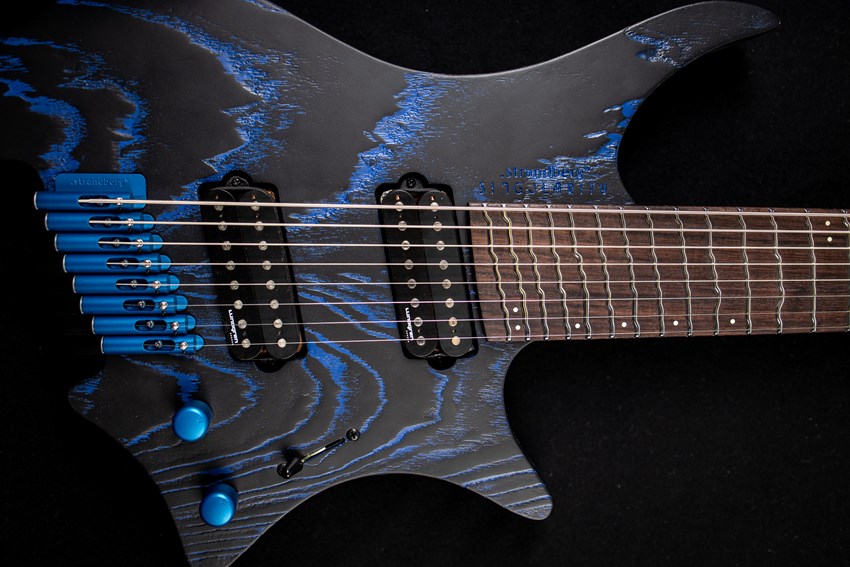 Both your models are equipped with Lundgren pickups. What made you choose these?
– After I got the call to start touring with Meshuggah, I talked to Ola Strandberg about building me an eight string and we very quickly decided to go with Lundgren M8 pickups, which are the ones that Meshuggah guitar players Fredrik (Thordendal) and Mårten (Hagström) use in their guitars.
– The pickups sounded amazing so when it was time to decide on the specs for my new models we kept the M8's in the eight string model. Now the seven string model on the other hand feels like a very different instrument than the eight string – it has a more traditional, guitar-y scale length while the eight string feels almost like a sort of bass/guitar hybrid instrument with its 26.5” to 28” multiscale – so I wanted a different set of pickups more suited to the seven string and the musical scenarios I use that guitar in. 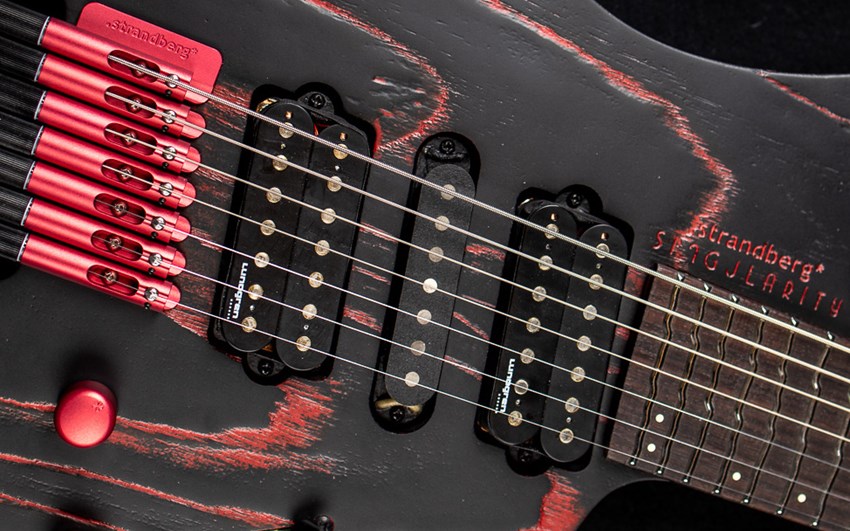 – We chose the Modern Vintage humbuckers for the bridge and neck positions and a custom single coil in the middle position, which gives me a lot of different tonal flavours from the 5-position switch. The Modern Vintage pickups have that singing quality that I need for my lead tone, and they are remarkably versatile as they work equally well for jazzy cleans as for death metal riff playing. The 2nd and 4th positions where you have one of the humbucker coils together with the single coil sounds more like a Strat than a Strat does, and I especially love the 2nd pos for glassy sparkling clean tones.
Can you describe what it feels like playing the Singularity models compared to standard guitars?
– Nowadays I so rarely play traditional electric guitars, but when I do it always surprises me how heavy they are, and how relatively clumsy and unbalanced they feel. I can still enjoy playing my old Ibanez JEM's or my buddy's old Strats, but it always makes me feel like something is missing. And let me just say that I will never, never ever ever again record anything with a non-True Temperament guitar, haha! 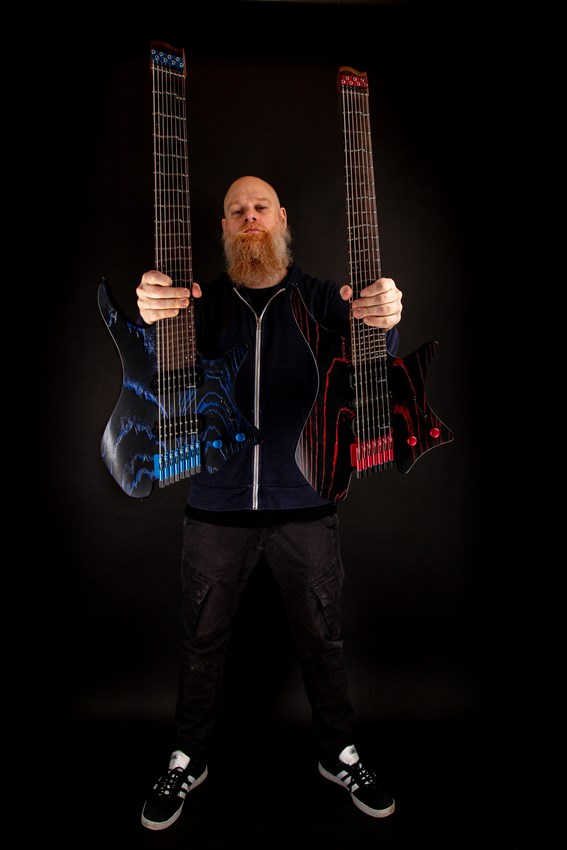 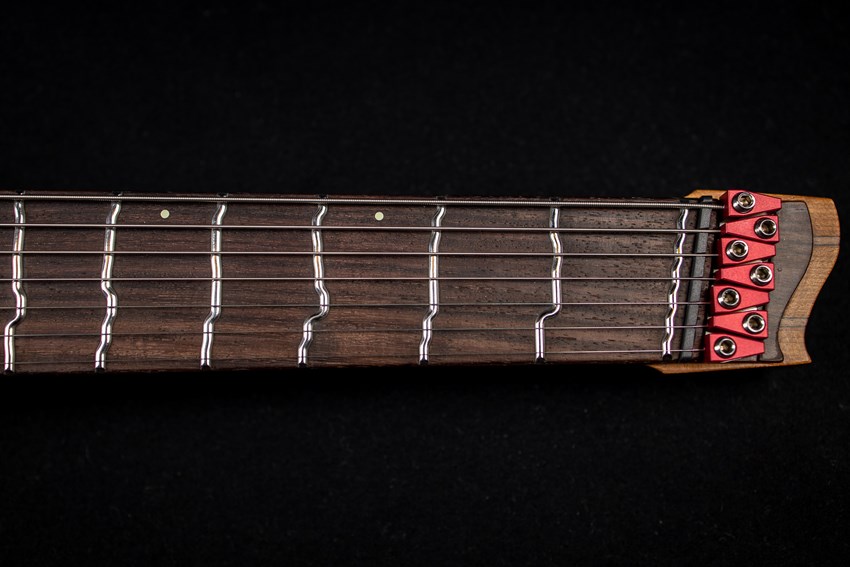 12 December 2022
The Swedish high end bass guitar brand Mattissonbass, has delivered hand-built instruments in the upper price range all over the world for the past decade. After working with many famous bassists, the demand has increased enormously. In order to meet demand, Mattissonbass has decided that they need help with production.

09 October 2022
A most important person in the development of the True Temperament Fretting System is co-founder and senior adviser Paul Guy. In this article, Paul recalls the beginnings of True Temperament and how Anders and he developed what today is considered by many guitar experts and world renowned guitarists, to be the greatest improvement to the guitar in several hundred years.
Show more