The German extraordinaire guitarist Martin Miller is highly respected among his guitar colleagues and considered one of the most virtuoso, competent and versatile guitarists of today. Miller has toured internationally as a solo artist and instructor, teaching masterclasses and providing instructional content online through several channels. His YouTube channel has attracted more than five million views and with a steady following.
Martin Miller has his own Ibanez signature model, MM1 – one of them equipped with True Temperament frets.

Your five years of academic music education, what new tools has it given you in your musical development?
– It gave me a solid foundation of fundamental skills, that allows me to adapt myself to a larger number of musical contexts. Also a formal music education puts you in the middle of a musical environment full of other musicians.
You divide your working time between teaching, producing and playing gigs and clinics. Explain please.
– I’m a one man operation. My daily life is quite different now from what I imagined a guitarists life to be when I was young. I really do a bit of everything these days, depending on what I’m currently working on and guitar playing is just one part of it. I might be mixing audio, producing, composing, writing, recording, video editing, promoting a product, doing social media, taxes, practicing guitar/vocals/keys, teaching, gigging and more. To me it’s all blending together into this one beautiful mess that is a modern musicians life.
What´s the best advice from you to a young guitarist aiming high?
– Consistency and patience are key for both building your skill set as well as growing your career. Find what you excel at and stick to it.
It´s hard to pin down your own guitar style. You seem to cover everything so fantastically well! How would you describe it?
– Many people call me a fusion player but I don’t really see myself that way. I got a little distracted a couple years ago maybe but at the core I’m a rock player. A rock player with a jazz degree! It’s more common to see jazz players with a rock influence, but for me it’s really the other way around.
Favourite music and guitarists?
– I’m really old fashioned, I like the classics. Pink Floyd, Queen, Toto, Dream Theater, Genesis, Sting, Peter Gabriel, Phil Collins and so on. Throw in a bit of jazz and fusion like Chick Corea, The Brecker Bros and Pat Metheny. I also dig some of the new breed of jazz/fusion musicians such as Snarky Puppy and Dirty Loops. I’m also a big fan of classical music, in particular from the piano masters such as Chopin or more modern masters like Stravinsky.
– Guitar players there are way too many good ones out there these days. My all time faves would be Steve Morse, John Petrucci, Pat Metheny, Steve Lukather and Mike Stern. I’m also in love with modern players like Josh Smith, Mark Lettieri, Ben Eunson and many more. Recently I’ve discovered this feller named Christian Maschetta who is largely unknown yet, but I’m sure he’ll get his time in the spotlight.
You play different Ibanez guitar models and have your own signature model, the MM1-TAB. What made you choose Ibanez instruments? What ideas are yours on the signature guitar?
– Ibanez chose me, really. They’re THE guitar icon of my generation and I’ve been emotionally attached to them since my teens. As for my MM1, I was involved in the design process of the AZ range with a bunch of other artists, so the very base of the AZ series is already extremely close to my dream spec. I just had to change the body wood from alder to mahogony and tweak some aesthetics like the hardware and finish to make it completely mine. 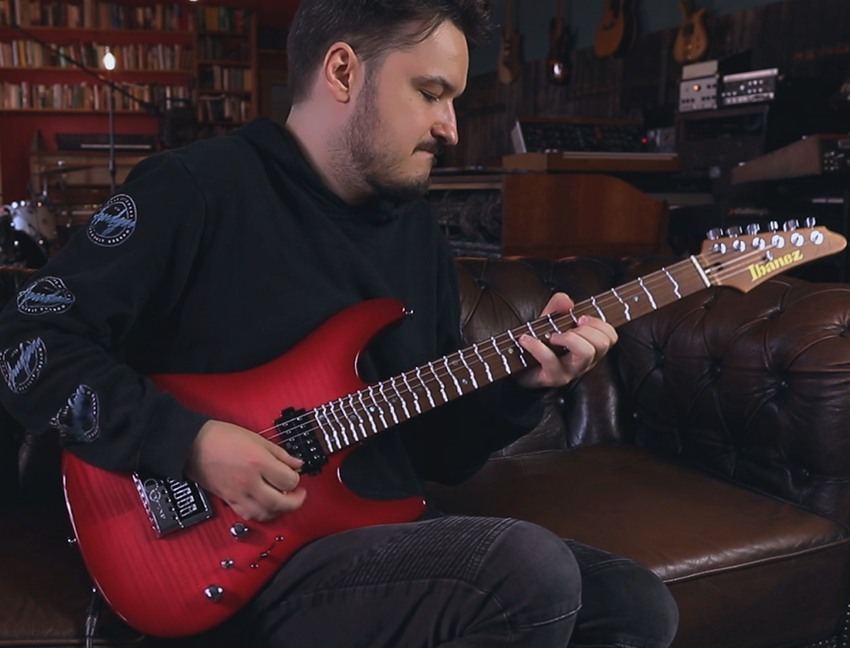 And now you have the True Temperament Fretting System on one of your guitars. What´s your opinion about the system?
– I absolutely love it. I’ve been recording guitars since my teen years and therefore developed a pretty sensitive ear when it comes to intonation. The guitar is truly a wonderful instrument but it can be an utter mess regarding intonation, especially in a recording environment. The True Temperament frets just make all these worries go away. It gives my recordings that extra polish that I desire as a producer and it saves a ton of time that used to be spent tuning your guitar for certain parts or chords.
Will True Temperament be a standard feature on your signature model?
– Let’s see how the public responds to it. The more people demand it, the more likely this could become. For now we’re in the very early planning stages as to what’s going to happen with my guitars
You play 6-string as well as 7-string guitar. What are the benefits of the 7-string according to you?
– The 7-string is a tool I grab for special occasions. My new record features a 7-string on two out of six songs. In that context I mainly use it for the impact and heaviness of that extended lower range. That seems to be the most common use for it, but I’ve been also experimenting with it in a jazz context and for accompaniment of a soloist or singer in a duet, as I the wider range covers more sonic spectrum. I can’t wait to use it in the Martin Miller Session Band, too, where I plan to use the low B-string
casually, like a 5-string bass player would.
Favourite gear, except for your Ibanez guitars?
– I’ve been working with Laney Amps, IQS Strings and Seymour Duncan pickups in the last couple years, whose products I love. On the digital side I’m a fan of the Fractal Audio AxeFX and Neural DSP Quad Cortex. I’ve been loving my Brauner Phanthera mic for vocals and I could sink endless hours into sitting at my Korg Kronos and discovering world of piano and synths
Tell us about your new upcoming solo album! Who participates besides you? Musically speaking, what can we expect this time?
– It’s a progressive rock record, that leans a little towards progressive metal in instances. It’s about 47 minutes long and consists of six songs, out of which one is an instrumental. It’s also my debut as a lead vocalist and lyricist on my own original music. I’ve created it over the course of three years and it’s been a wild ride. I can’t wait to share the results.
– The other musicians on the record are Sebastian Lanser on drums, who you may know from bands such as Obscura and Panzerballett and Ben Jud on bass and Marius Leicht on keys, both from my Session Band.
– Musically I’d say it is quite a nostalgic record. I wanted to make a record that gives me chills like only the records from the 70s and 80s ever did, but still retain some of the extra edge of the modern era. A priority for me was beautiful instrumental and vocal melodies and a bigger focus on groove than a lot of bands in the genre. Also I wanted the focus to be on the music, not on the guitar playing. The guitar on this record is just another instrument like any of the others.
You belong to a group of very virtuoso and technical guitarists who are constantly pushing the boundaries. Is it possible to go that much further? What do you think will be the next step?
– I hope the next step will be music and artistic expression. My generation surely has played all the notes, now it’s time to discover what we can do with those skills. To be honest, I don’t consider myself trying to push the boundaries of the guitar and I don’t like a lot of the music that attempts to do so. I just had to get as good at guitar as I could to then do what I really consider my calling, which is original music.
– I really wish for mine and the upcoming generation to come up with good, genuine, authentic and meaningful artistry. Personally, I try not to partake in the online guitar arms race, even though the talent out there is undeniable.© Ulf Zackrisson